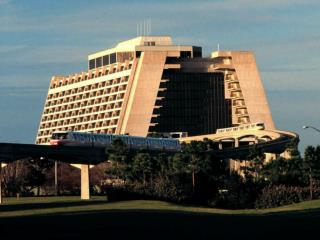 THE WALT DISNEY WORLD RESORT(S) Disneyland became surrounded by tens of small motels/hotels, cheap restaurants and worst of all, sideline attractions Dream Bigger Go Googie! Disneyland couldn’t expand, and the entry to the Happiest Place on Earth became an eyesore to the city and to guests

Walt Disney World ! - . by: c.j. disney’s history. disney company started in 1923 mickey mouse and the rest of the gang

Walt Disney World’s Polynesian Resort - . choosing a resort for 2012 vacation. why the polynesian?. this year our

Visit WALT Disney World - . enter. click on mickey’s head to explore what each one is all about. animal kingdom. epcot.

My Favorite place to visit The Walt Disney world resort! - . the first theme park opened was the magic kingdom. it opened

Walt Disney - . birthplace and dates of life. born in 1901 in chicago illinois his father was elias disney his mother was

Walt Disney - . by: madison swingle. did walt disney have siblings?. walt had four siblings. he had three brothers and

Walt Disney - . by rubi rios 3 rd period. it wasn’t always disney. this is true for both walt’s own last name which