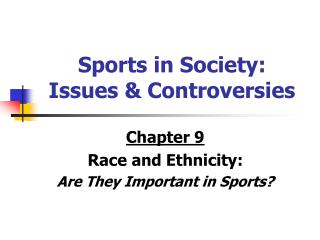 Youth Sports - Do you know what the #1 reason children cite for their participation in a sports program? “to have

Welcome to The Economics of Sports! - Why study sports economics? sports and recreation industry is a big business. pre:

Extreme Sports - . listening &amp; speaking. objectives. by the end of the lesson, you’ll be able to. get to know

Goals for Today - When push comes to shove: contemporary research, assessment, and treatment innovations for partner

Ethics - . the paper will test…. candidates ’ attitude and approach to issues relating to integrity, probity in

PROBLEM GAMBLING PREVENTION AN INTRODUCTION - Gambling has rapidly become an acceptable and regular part of our society: