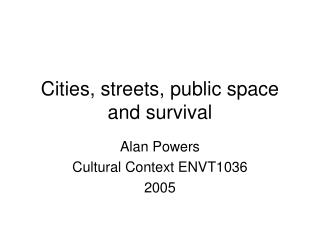 Treatment - . goal: the ultimate goal is a cure: long-term, disease-free survival if not attainable control of the

Victory - . 3312686. in the cities of the victorious allies, thousands flooded the streets to celebrate victory and the

The World‘s Happiest Cities 世界上前十名最快樂的城市 - . why they are so happy and we chinese’s cities

Cities &amp; Urban Land Use - . where are cities located? and why?. site * absolute location of a city * a city’s

Cities and the Industrial Revolution - . the rapid growth of cities caused a large _____shortage. housing. the sudden