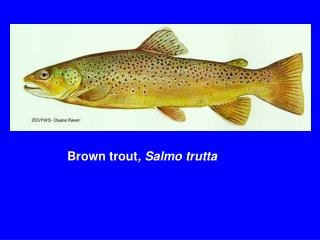 Brown Trout - . 4 things i like about our brown trout. 1. that in there first part of there life cycle they don’t need

Trout - . evolution. the evolution of trout can be traced back at least 100 million years ago to a fish found in the

Rainbow Trout - . jayton .d mrs.ewers. what do they look like?. they weigh about 2 to 5 pounds. they have red bands on