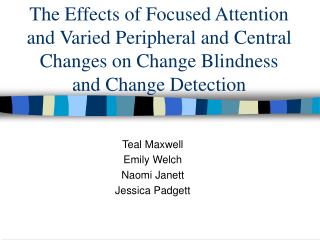 Change! Series 3 - . reading: act 26:18. directional change. from blindness to sight from darkness to light from satan to

Self –Esteem and Adjustment: Psychosocial Aspects of Blindness and Visual Impairment - . based on self-esteem and

Attention &amp; Change Blindness - . what is attention?. how is the word used? examples: something bright caught my

States of consciousness - . waking, sleep, dreaming. what is consciousness?. root of psychology as a science state of