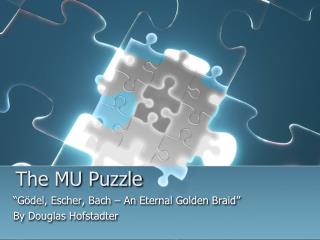 Arrow Sudoku - . or sudokarrow if you read the saturday i purchase arrow sudoku magazine from clarity media here:

Puzzles - Each puzzle has a point rating 1-10 with 10 being the most difficult. puzzles. the answer for each puzzle is in

Object Detection - . 01 – basic hough transformation jjcao. what do you see?. “puzzle” solved from a new view. !.

Language and the Reading Puzzle - . virginia a. mann dept. of cognitive sciences university of california, irvine

AMS 345/CSE 355 Computational Geometry - . lecture: polygons, guarding. joe mitchell. do you like puzzles?. come to the

Grails - By: saurabh dixit. grails. what is grails. grails is a full stack framework and attempts to solve as many pieces

TANGRAM - . about tangram. tangrams come from china. they are thousands of years old. the tangram is made by cutting a