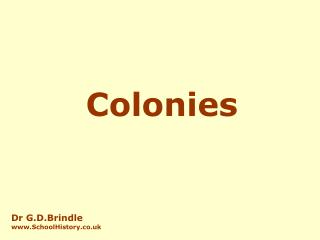 Colonies. Dr G.D.Brindle www.SchoolHistory.co.uk. One of the major reasons for bad relations amongst the nations of Europe in the years before 1914 was that they were engaged in a struggle to obtain overseas colonies.

Colonies - . dr g.d.brindle www.schoolhistory.co.uk. one of the major reasons for bad relations amongst the nations of

Colonies - . colonies. colony — &quot;a body of people who settle in a new locality, forming a community subject to

Middle Colonies “The Restoration Colonies” - . ethnically diverse group. new era in colonization why are the middle

British Colonies - . unit 1.4. coastal cities. cities in the colonies were on the water. why? by 1750, the largest

Middle Colonies - . led by the colonies of new york and pennsylvania. new york. was originally settled by the dutch and

Chesapeake Colonies - . virginia and maryland. attracted few aristocrats or gentry other than the governor’s who were

English Colonies - . social/political/economic conflicts. essay 1. though there where many differences in the