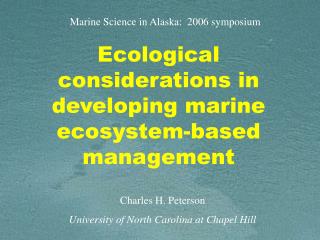 The Role of Marine Reserves in Ecosystem-based Fisheries Management

Marine ecosystem - What covers almost three-fourths of the earth’s surface? what holds both the larges animals and some

The Marine Ecosystem - . ocean overview. oceans cover three quarters of the earth's surface, and they are as diverse as

Ecosystem, Ecological N iche - . ecosystem. a community of living organisms (plants, animals and microbes) together with

Moving Toward Ecosystem-Based Management: - . how do we get there from here?. an ocean blueprint for the 21st century.

Ecological Succession Change in an Ecosystem - . what is succession?. natural, gradual changes in the types of species