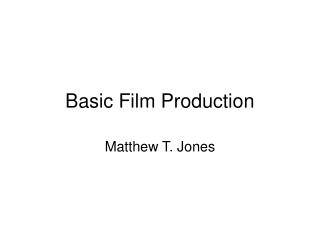 Basic Film Production - . production phases. there are three phases of production common to most professionally

Basic Film Terms - . auteur. french for &quot;author&quot;. used by critics to indicate the figure, usually the

Basic Film Terms - . frame. dividing line between the edges of the screen image and the enclosing darkness of the theater

Film Production San Francisco - Are you looking for a video production companies san francisco? if ye then come to us we

VIDEO AND FILM PRODUCTION - . the purpose of movie. to inform to influence to inspire to entertain. movie. a

animated film production suffolk - 'animation' is a technique that is used to add movement to static objects or images.