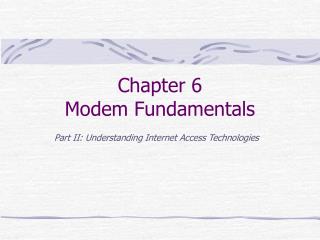 Chapter 6 Ethernet Fundamentals - . from its beginning in the 1970s, ethernet has evolved to meet the increasing demand

Chapter 6 Ethernet Fundamentals - . by: steven p. luse. from its beginning in the 1970s, ethernet has evolved to meet the

Modem - . acronym for mo dulator- dem odulator converts a series of binary voltage pulses into an analog signal the

MODEM - J.padmavathi. modem. origin of modems. the word &quot;modem&quot; is a contraction of the words

Netgear modem - Netgear cable modem. the new modem was very easy to set up and get online. we are seeing better coverage