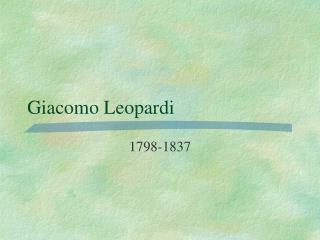 Giacomo Leopardi. 1798-1837. Leopardi’s Philosophical Poetics. Leopardi’s thought evolves from the gradual awareness of his own unhappiness, whose origin can be found in the poet’s environment and historical background

Giacomo Leopardi - . the romantic age. gens leoparda. when does leopardi write the “story of his soul”? how does he