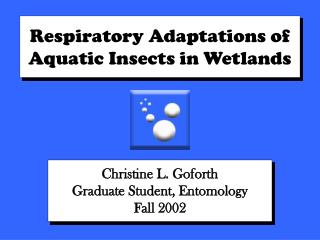 Aquatic Insects - . 8 april 2009. aquatic insects. insecta (even hexapoda) are plesiomorphically terrestrial . but there

AQUATIC INSECTS - . i. phylum arthropoda a. major characteristics. 1. jointed appendages and…. 2. an exoskeleton

Thermal Tolerance in Aquatic Insects - . alisha a. shah fall 2013. what is thermal tolerance?. ability to withstand a

Adaptations to Terrestrial and Aquatic Environments - . some adaptations of plants for life on land osmotic adaptations

Metamorphosis in Insects - . insect life cycle development from egg to adult and again to egg represents one life cycle

Proteins in Insects - . by: roberto gomez, stefano meier and thomas hearne. insects need proteins to do many things .

World of Insects - . characteristics, orders, and collecting. what you should know about insects …. taxonomy. kingdom

Management of Wetlands - . chapter 9. previous attempts to management have simply been to drain them or harvest and burn

Wetlands of Virginia - . sol 6.7 and 6.5. wetlands – basic information. there are many types of wetlands, but they can