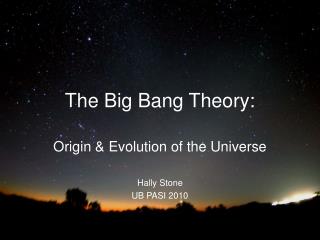 The Big Bang Theory:. Origin & Evolution of the Universe Hally Stone UB PASI 2010. Newton’s Static Universe. Universe is static and composed of an infinite number of stars that are scattered randomly throughout an infinite space.

THE BIG BANG THEORY - . the big bang theory will be an illustration of how a theory develops by modeling. text references

Allah and the Big Bang Theory - . standard big-bang cosmology. the universe, including all of time, space and matter,

Is the Big Bang Compatible with the Bible? - . mike riddle. topics. what the bible teaches about time the bible and the

The Big Bang - . where it all began. the big bang. the name “big bang” started as a joke from people who believed the

FUNdamentals of Astronomy - . kayla m. young. the universe. the big bang theory is an effort to explain the beginning of

Big Bang - . a trip to the beginning of the universe. by stefan diehl. overview. introduction history of the

The Big Bang - . few theories are so widely known by the public as the ‘big bang’ origin of the universe. for gcse

The Big Bang Theory - . a theory in an explanation based on what is observed in the natural world and experimental

U2: BIG BANG THEORY Brainstorming and Back to the Beginning - . 1. what makes a theory a theory?. 2. why is a theory