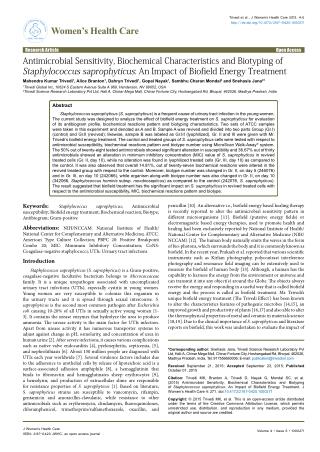 The current study was designed to analyze the effect of biofield energy treatment on S. saprophyticus for evaluation of its antibiogram profile, biochemical reactions pattern and biotyping characteristics. Two sets of ATCC samples were taken in this experiment and denoted as A and B. Sample A was revived and divided into two parts Group (Gr.I) (control) and Gr.II (revived); likewise, sample B was labeled as Gr.III (lyophilized). Unit 1 Cells and Cell Processes - . 1.1 characteristics of living organisms. what you need to be able to do: list and

What is a MIC ? Relationship between a MIC and conventional pharmacodynamic parameters - Veterinary committee on