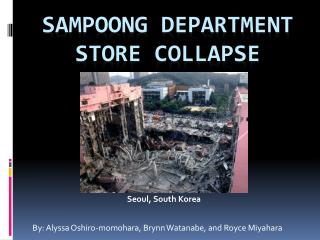 Department Store - . a department store is divided into two sections, electronics and furniture. each section offers a

Collapse - The causes of the great depression. collapse. bellwork. ronald reagan once said, “a recession is when your

Collapse - About the author. won the pulitzer for guns, germs, and steel: the fates of human societies. 1997. - his

History of Brett’s Department Store - . by: megan vossen and nicole jehorek group #24. how everything got started. born

Class 20. Hightower Department Store - . introduction to regression. what we will cover today. what is a regression line?

Collapse ? cause - . why is this an important topic to master?. one of the great skills in em is the ability to risk

Corporate Collapse - . “virtually nothing is to be learned from studying individuals involved in corporate failures, no