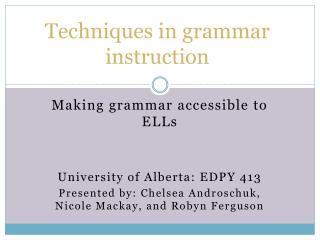 Techniques in grammar instruction. Making grammar accessible to ELLs University of Alberta: EDPY 413 Presented by: Chelsea Androschuk, Nicole Mackay, and Robyn Ferguson. Historically, grammar has been considered to be (Hinkel & Fotos 2002):. The advent of other approaches:.

Differentiated Instruction - . for reading instruction. part one:. vocabulary instruction that makes a difference!. of

What are you doing to improve instruction? - . organizing student learning 5 + 1. instruction, concept d

PARAPHRASING Techniques - . tactics to. rewrite something. in a. different way. paraphrasing. to paraphrase is to say the

Differentiated Instruction - . david w. dillard. objectives. based on the information provided today, teachers will be