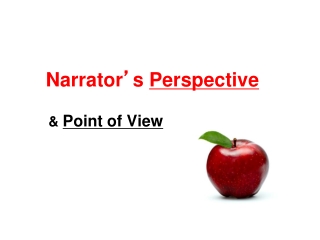 Narrator ’ s Perspective. & Point of View. What ’ s the difference?. POINT OF VIEW : focuses on who Who is telling the story? Who is speaking? the type of narrator used to tell the story PERSPECTIVE : how the characters view and process what ’ s happening within the story.