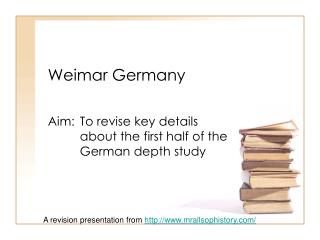 Weimar Germany. Aim: To revise key details about the first half of the German depth study. A revision presentation from http://www.mrallsophistory.com/. The situation after World War 1. The Kaiser has abdicated and left Germany

Weimar Germany - . aim: to revise key details about the first half of the german depth study. a revision presentation

Weimar Germany - . democracy on trial. first…. before we talk about weimar germany it is important to know how germany

Weimar Germany - . really good website on weimar germany: i would suggest using it combined with the powerpoint to create

Weimar and Nazi Germany - How and why does german adaptation of democracy lead to nazism?. 1. article 48. during the

WEIMAR GERMANY 1919-1933 - . frederic ebert was the first president of germany. women voting for the first time in

Weimar Germany 1919 - 1929 - . political problems of the weimar republic. starter: can you identify these political

Culture in Weimar Germany - . 1924-1929. connector. what does this suggest about weimar culture?.

The Weimar Republic in Germany - Issues, impacts, successes and failures was the weimar republic doomed from the start?.

Weimar Germany and the Roaring Twenties - . overview. versailles and the end of world war i weimar republic economic and

Weimar Germany : challenges, problems and failure - . as part of the allied conditions for surrender at the end of world

What was the problem with Weimar Germany? - The treaty of versailles 1919. the weimar constitution 1918. the sparticist