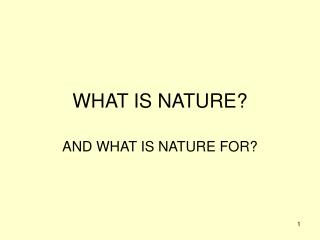 WHAT IS NATURE? AND WHAT IS NATURE FOR? QUOTES FOR THE WEEK The Lawn is nature under totalitarian rule. Life without labor is guilt. Labor without art is brutality. (John Ruskin, 1819-1900, British artist, scientist, art critic, poet, environmentalist, and philosopher).

THE NATURE OF SPEAKING - . joko nurkamto uns solo. what speakers do. speech production conceptualization and formulation

The Nature &amp; Importance of Entrepreneurship - . chapter 1. “ being an entrepreneur and creating a new business

THE NATURE OF LIGHT - . light is an electromagnetic wave light is also a particle: the photon this nominal contradiction

“ Human Being is by Nature a Political Animal” (Aristotle, Politics ) - “well, my dear adeimantus, what is the