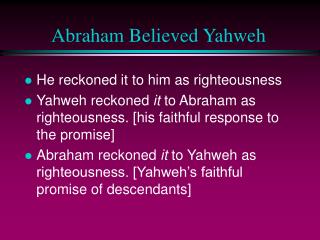 YAHWEH - . the development of judaism was closely connected to the social and economic evolution of the hebrew people a

Yahweh Our God - . december 2. consider … . understanding god is like trying to unscrew the inscrutable. what did this

Yahweh Our Father - . december 9. what do you think?. what are some characteristics and behaviors of a “good father?”

Yahweh Our Righteousness - . december 16. what do you think?. what or who do you think sets the standards for right

Yahweh Our Righteousness - . december 16. what do you think?. what or who do you think sets the standards for right or

The Planting of Yahweh - . 2 sam 7:10 moreover i will appoint a place for my people israel, and will plant them, that

Trusted and Believed - . according to a march 2017 survey, 59% of respondents said they accessed local news “somewhat

ABRAHAM - . the story of abraham. abram lived long ago in the land of canaan and one day the lord came to abram and said,

ABRAHAM - . how one man’s life can impact eternity. the activity of god in response to praying that impacts eternity.

ABRAHAM - . staggered. not. romans 4:19-24. abraham staggered not. stagger. to be uncertain, be at odds with oneself,

Abraham - . our father in faith “look up at the sky and count the stars, if you can…so shall your descendants