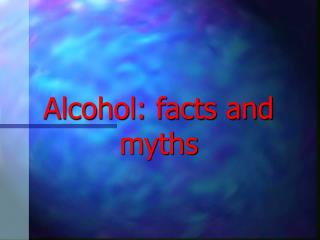 Alcohol: facts and myths Alcohol as a drug Alcohol is an dependence drug. Social psychologists refer to the perception of alcohol as a social lubricant. Many people view alcohol as a non-drug because: alcohol is legal advertising and media promote drinking as normal

The Dangers of Alcohol Abuse: the facts You Need To know About alcohol - Alcohol in the news everyday, thousands of

Hard Manhood Myths and Facts - Weird Truths - In spite of long acquaintance and frequent use, there are many things about

Energy Myths and Facts - . “everything we consume or use—our homes, their contents, our cars and the roads we travel,

Alcohol &amp; Drug Abuse - . know the facts about alcohol!. alcohol is a contributing factor in at least half of all

Consequences of Alcohol Use - . basic facts. alcohol is the most widely used and abused drug. although drinking alcohol

Alcohol - . chapter 22. facts about alcohol. ethanol- the type of alcohol in alcoholic beverages a powerful addictive

Alcohol Discussion - . part 1. intro/myths. using a straw? drinking but not drunk? beer and wine are safer? only once in

5/16/2013 - . what are three health risks related to alcohol use that you anticipate learning in this lesson?. the facts

Tobacco Industry Myths and Facts - . prof dr elif dağlı. conflict of interest. none. myths of the industry. tobacco has