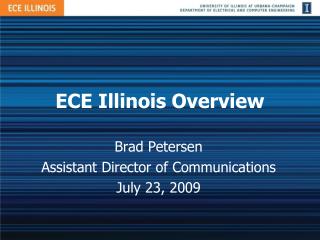 ECE Illinois Overview. Brad Petersen Assistant Director of Communications July 23, 2009. The University of Illinois at Urbana-Champaign. “Here, my friends, on the prairies of Illinois and of the Middle West, We can see a long way in all directions.

ECE 1010 - Project 1 Overview - . project description. the aim of this project is to design a robot that moves along a

OVERVIEW OF UNIVERSITY OF ILLINOIS HUMAN RESOURCES - . presentation to the university of illinois board of trustees march

Illinois - . by: zach. illinois nickname. illinois’s nickname is the “land of lincoln”. the date illinois came into

Illinois - . land of lincoln. capital. the first capitol building was in kaskaskia. vandalia became the second

Illinois - . by gavin, alex, jake. the capital of illinois is springfield. illinois became a state in statehood, dec. 3,