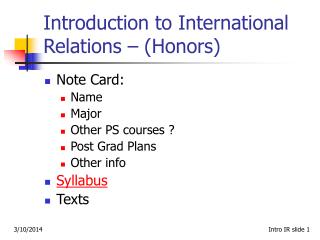 Half of a Yellow Sun - . love and race/class relations as the seeds of war and its resolution . joyce chen and kate liu,

TOPIC 1 OVERVIEW OF INDUSTRIAL RELATIONS - . learning objectives upon completing this topic, students should be able to:

Introduction: Page 1 of 3 - . no portion of this presentation may be reproduced in any form without permission from the

Realism: Power and the Security Dilemma in International Relations - . po 201: introduction to international studies and

Chapter 12: Postcolonialism by Siba N. Grovogui - Learning outcomes. after this lecture you should be able to: understand