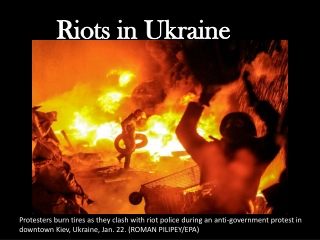 Anti-government protests erupted this week in the Ukraine city of Kiev. Despite crisis talks including President Viktor Yanukovych, rioting still persists and has started to spread beyond the capital. London Riots - . citizen journalism and freedom of speech. overview. when: between 6 th and 10 th august 2011. where:

London riots - . lo: - why did the riots happen? can rioting ever be justified? - how can we prevent rioting in the

Study in Ukraine | MBBS in Ukraine - Welcome to ukraine education. we are top leading education consultancy in ukraine to

Ghetto Riots - . aims:. identify why riots took place in northern cities of the usa in the 1960s. understand why some

MBBS in Ukraine | MBBS Admission in Ukraine - Want to study mbbs in ukraine with an affordable fee structure? admission

The London Riots - . “it’s time that the many decent youths in london make a bold mark of rememberance upon society.

Kitangry: Study in Ukraine | Tourism in Ukraine - Kitangry corporation was established in 2013 to provide investors (