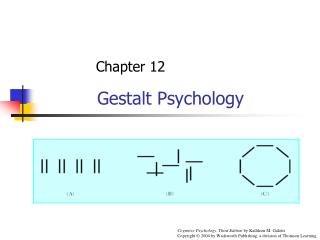 Gestalt Psychology - . gestaltism. is a theory of mind and of brain influenced by the berlin school this theory states

The Expressive Self: Gestalt Psychology, Art and Personality - . aesthetics in the 18 th century. aesthetics: study of

Gestalt Therapy - . questions?. what key concepts do you know in terms of gestalt therapy?. view of human nature: people

Gestalt Therapy - . what are you doing? what do you feel? what do you want?. psychopathology. people have problems

Gestalt Principles - . gurpreet. what are the gestalt

A day with Gestalt - . examples of gestalt you may see everyday. by, william a strange. a presentation on gestalt

Gestalt Principals: Perception of Design - . gestalt principles: how are your designs perceived?. when your first

GESTALT PRINCIPLES - . gestalt principles: the way in which we organise features of a visual scene by grouping them to

Gestalt principles of Perception - . illustration of each one of the 9 selected principles. give 2 examples of each and