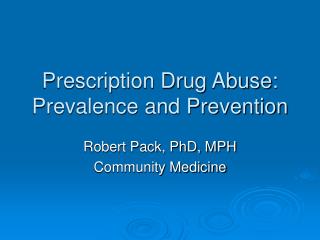 Objectives - Section 17.1. legal and illegal drugs. objectives. define drug abuse and distinguish it from both

Prepared by David S. Anderson, Ph.D. Professor of Education and Human Development - Drug and alcohol trends in the united

GRADE SIX - . drug use &amp; abuse. data on drugs. a drug is a substance other than food , which is taken to change

THE ROLE OF THE CHURCH in SUBSTANCE ABUSE PREVENTION - . when a community is faced with a problem, who usually takes the

Prevention of Alcohol and Other Drug Problems What We Can Do! - . a program for parents. prescription drug abuse is a

Prevalence of Substance Abuse in Sports - . accurate assessment is difficult to achieve because of the sensitive and