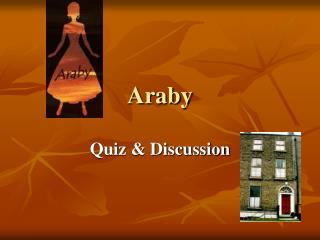 Araby. Quiz & Discussion. Any Questions?. Language & Structure. 1. Which of the following is NOT a symbol in the story? . The bazaar Mangan’s sister Gazing up into the darkness I saw myself as a creature driven and derided by vanity; and my eyes burned with anguish and anger.

Araby - . why an impossible quest?. your discussion record. about the narrator’s stories

Araby - . by james joyce. once upon a time…. a young boy lived in dublin, and grew up in a drab neighborhood. he longed