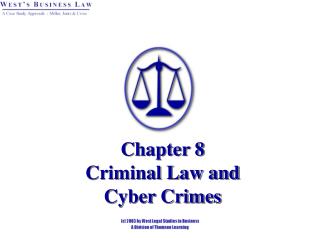 Chapter 8 Criminal Law and Cyber Crimes. §1: Civil vs. Criminal Law. Major differences:. §2: Classification of Crimes. An act can have both civil and criminal consequences. (O.J. Simpson trials). §3: Essentials of Criminal Liability. To be convicted of a crime, a person must:

Cyber Crimes - . cyber crimes. indicate that the crimes are committed through the use of technology. also known as:

Types of Cyber Crimes - . phishing - is a scam to steal your online username and password. phishing attacks work by

Chapter 6 Criminal Law and Cyber Crime - . learning objectives. what two elements normally must exist before a person can

Criminal Law part 2: Introduction and Crimes against the person - . mr. garfinkel 2/4/14. state of mind vs. motive. most

Delaware Criminal Law Code: Crimes against the Person - . murder. killing with malice: an intent to kill or cause serious

E-rule : Cyber crimes - . tutorial. cyber news. “ it is a growing threat to the national economy ”. incidence of

Cyber Crimes - . mumbai police. why do we need to know about this. everybody uses computers crimes like forgery,

Chapter 2 – Criminal Law - . a body of laws that deal with crime and the punishment of criminal offenses. what is a

An Introduction to Crimes and Criminal Law - . chapter 8. goals and objectives. introduce, become familiar with, and be

Criminal Law Chapter 3 - . the nature and purpose of law. law refers to: statutory law is often the result of moral

CYBER TORTS AND CRIMES - . midterm(1). what is tort?. it is a civil wrong not arising from a breach of contract . it is a