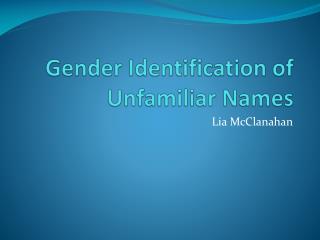 Gender Identification of Unfamiliar Names. Lia McClanahan. He looked at the dragon thoughtfully. "You need a name.  I heard some interesting ones today; perhaps you'll like one."

UNFAMILIAR TEXT - Maori poetry. unfamiliar text. over view. look at how to analyse and attack a poem. start glossary of

Unfamiliar Words - . common core standard. what does that mean?. to figure out both types of words and phrases, y ou can

Unfamiliar Text - . writing a response using the tempers method. you have the resources in front of you. step one: panic

Unfamiliar Words - . accommodate [uh- kom -uh- deyt ]. verb to do a kindness or a favor to; oblige i went to accommodate

Unfamiliar Words - Objective: given sentences with unfamiliar words, ts wbat use context clues to  determine the

2.3 Unfamiliar Text - . an overview. your paper will include three extracts or pieces of text. you will use each of these

Making the Unfamiliar- FAMILIAR - . miss lawrie’s tips for success. what is it asking you to do?. decide on the purpose

June 13 Unfamiliar Text - . interpreting the question 1. draw the table in your books including the text 2. draw a 2 nd