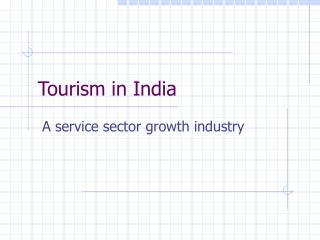 Tourism in India A service sector growth industry India: An emerging superpower India’s GDP will exceed Italy’s in 2020, France’s in 2020 Germany’s in 2025 and Japan’s in 2035 Goldman Sachs Projections (US 2003 $ Billion) Tourism growth in India

Dental tourism in India - Has gained a lot of recognition in the past few years. this has been possible mostly due to

medical tourism in india - There was a time when india was lagging in medical care. but now with the advancement of

Medical Tourism in India - Person living in one nation and travel to another to receive medical facilities. individuals

Medical Tourism In India - Medcureindia is accountable as a best medical tourism company in india. it is well known for

Best Religious Tourism in India - Religious tourism in india has grown multiply and so has the reputation of india. let