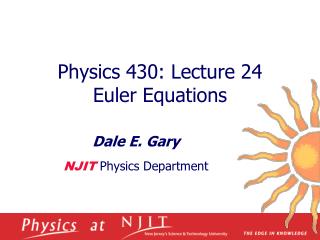 Equations: Linear and Systems - . overview. solving linear equations for a given variable. finding and using the equation

Lecture 19: Damping in the Euler-Lagrange Formulation - . let’s bring back our friend figure 3.1 from den hartog. f 1.

Chapter 9: Systems of Equations and Inequalities; Matrices - . 9.1 systems of equations. a set of equations is called a

Physics Beyond the SM - . wim de boer, kit. outline. lecture i ( sm+cosmology ) what are the essentials of a grand