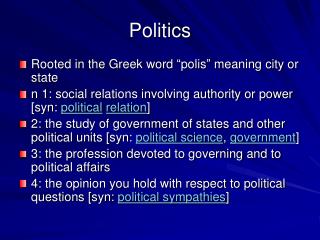 Politics - . (sometimes) giving people what they want. what is the point of government?. people want stuff! healthcare

POLITICS - . what is politics?. let ’s brainstorm. here the big word. power. whose power?. my power? your power ?

Politics - . aristotle. political partnerships. could also be called associations begin with husband and wife then

Politics - . power is the ability to exercise one’s will over others. authority is the socially approved use of power

Politics - . by courtney smith &amp; grace parsons. what’s what?. capitalism: is a political and economic system in

Politics - . repeal and replace!!. finally, the long-awaited gop plan to replace obamacare:. issue. she said. he

POLITICS - . kendall kaut. why we need to understand the da. links to nearly everything key reason most affirmatives do

Politics - . how to pick your disad. 1. link debate – certain affs just go a certain way. gotta win that. in my mind,

Politics - . politics is a social process through which people and groups acquire, exercise, maintain, or lose power over

Politics - . cabinet government. when a government is elected, some of the representatives are chosen to be in the