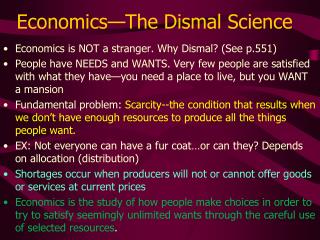 Economics—The Dismal Science. Economics is NOT a stranger. Why Dismal? (See p.551) People have NEEDS and WANTS. Very few people are satisfied with what they have—you need a place to live, but you WANT a mansion

Unit 1: Foundations of Economics What comes to your mind when you hear the word SCARCE? (video about scarcity) - . what

Economics - . chapter 1: what is economics?. scarcity and the science of economics. what is the fundamental economic

What is Economics? - Advanced placement microeconomics unit i : basic economic concepts essential question : why might

ECONOMICS &amp; SCARCITY - . economics. what is economics to you? money? buying? ? define economics – what is

WELFARE ECONOMICS - . positive economics: what “is” concerned with understanding and predicting economic behaviour.