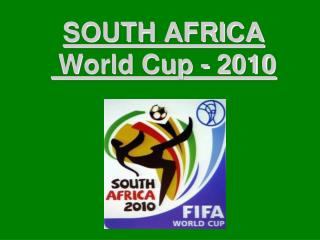 South Africa and the World Cup: Cricket’s Greatest Tragedy - Itu2019s mind-boggling for a side like south africa that

World Cup 2010 As reported the next world cup venue will be South Africa - . the latest in gear will made available to

Lesson 4 Will South Africa benefit from the World Cup? - . starter: why is abhay looking forward to the world cup?. abhay

South Africa 2010 World Cup – its all about the geography…… - . title: world cup geography lesson objective: to

Welcoming World Cup football to Africa - . design brief – south africa 2010. am i so round with you as you with me,

In the ICC World Cup-2019, South Africa played their last match - At the old trafford ground on saturday and beat

WORLD CUP! - . by: karson pilgrim, and christian hidou. land scape. there are many things at brazil like theirs mountains