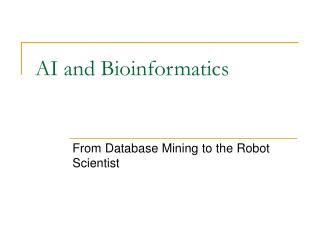 AI and Bioinformatics - . from database mining to the robot scientist. history of bioinformatics. definition of

Strong AI and Weak AI - . there are two entirely different schools of artificial intelligence: strong ai: this is the

Biology and Bioinformatics - Bi820 – seminar in quantitative and computational problems in genomics. biology and

Bioinformatics and BLAST - . previous knowledge. genome consists of entire dna sequence of a species dna is the blueprint

Navigation and AI - . mark nelson mjas@itu.dk. movement and behaviors. in general, action in the world some automated,

AI and Games - By lauren argenio russell braun. ai and games. project goals. what ai is the basics of how it works how it

Robots and AI - . relationship perception-action-brain/mind – fodor: only mind not perception or environment dst:

HCI and AI - . hci is: human-computer interaction letting humans and computers do what they do best overview, zoom and