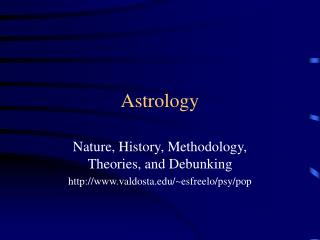 Astrology - 2/18/1996 …lots and lots and lots of math. goals is astrology a science? why should we care? is science

Astrology - . the stars and what they tell us. what is

Astrology - . by: becca giannotto. where it started. astrology is the scientific interpretations of the heavenly bodies

Astrology - . a basic understanding of the cycles &amp; rhythms of life &amp; living. the 7 planets of the

Astrology - . by: carrie sanders. believers. in 1996 roper-starch worldwide survey reported that one out of every four

Astrology - . the study of the positions and aspects of celestial bodies in the belief that they have an influence on the

Astrology - Astrology is based on the claim that at the time of a person‘s birth, stars have an influence on

ASTROLOGY - . *remember the chinese zodiac believes that “… a secret animal hides in our heart …” according to

Career Astrology - Includes all the roles you undertake throughout your life - education, the training paid and unpaid