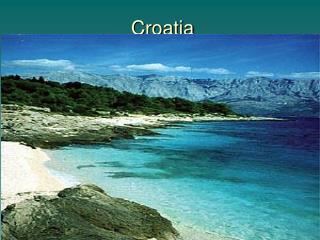 Croatia. The red stands for hardiness, bravery, and strength The white stands for peace and honesty. The blue stands for truth and loyalty. The Croatian Flag. A fishing boat in Croatia.

Croatia - . sings : duško jeličić song : beli, cres i lubenice. cres is our biggest island (same as krk) with about

CROATIA - . by nenad pintarić, 8.a &amp; luka krištofić, 8.a. geographical position. croatia is located between

CROATIA!!! - . croatia in all its beauty!. http://www.youtube.com/watch?v=nfgdo5ntf2m

CROATIA - . by: jelena gunc &amp; melanija vidović. regions of croatia. there are 3 regions in croatia: lowland