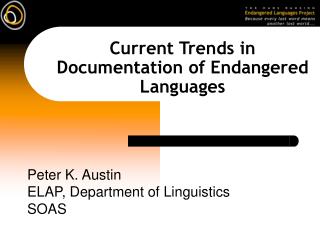 Current Trends in Documentation of Endangered Languages. Peter K. Austin ELAP, Department of Linguistics SOAS. Thanks to Oliver Bond, Lise Dobrin, Lenore Grenoble, David Nash David Nathan for discussion of the ideas in this presentation; they are absolved of responsibility for errors.

Trends in Scripting Languages - . history. for me the purpose of life is partly to have joy. programmers often feel joy

Fieldwork on Endangered Languages: Some anecdotes - My personal story that will hopefully be of some general interest and