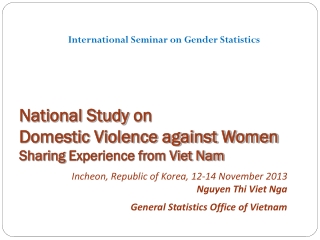 The National Survey on Domestic Violence Against Women in Viet Nam - . international association for official statistics

Italian experience on violence against women survey - . giovanna tagliacozzo. the problem. violence is ... any form

Domestic Abuse &amp; Violence Against Women Worldwide - . around the world at least 1 in every 3 women suffer

How Can Women Fight Against Domestic Violence? - It can be considered that domestic violence is evil in the society, we

Statistics on Violence against Women - . review of module on crime and victimisation in general household survey in

Violence against women - . a feminish presentation created by edoxie allier , christian ludt and gabriel morantes. a

Violence Against Women - . crimes against the minority majority. table of contents. those affected by violence causes for

VIOLENCE AGAINST WOMEN - . nso. findings from the 2008 national demographic and health survey esa/stat/ac.219/33.

Common Problems in Domestic Violence Cases - Domestic violence is a growing issue among most countries around the world.