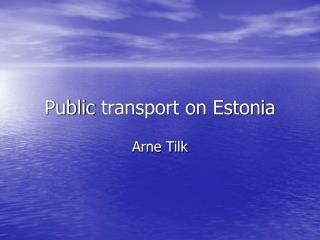 BRIEFING ON PUBLIC TRANSPORT SUBSIDIES - . presentation to the portfolio committee on transport 05 november 2013.

PUBLIC TRANSPORT - . city of kaun as. the second largest city in lithuania; approx. 320,000 citizens; an important

Transport Commons: A public transport service based on my timetable - . farzad safaei. more than 56% of us live in