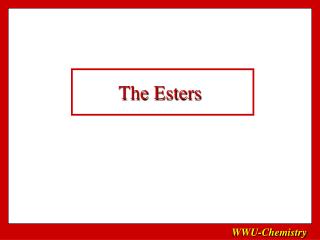 The Esters. Fischer Esterification. This is not necessarily the best method of preparing esters, but it does serve to illustrate that esters are essentially the products of a reaction between a carboxylic acid and an alcohol. Lactones.

Esters - . the smelly compounds. what are esters?. a group of compounds that are responsible for some natural and

Esters - . formal lab. chemistry joke. q: why is uranium my favorite element? a: because i love u!!. what are esters?.

Esters - . c.i. 13.5. what are they? how are they made?. formed when an alcohol reacts with a carboxylic acid. very slow

Esters - . esters. esters are formed by the reaction of a carboxylic acid with an alcohol e.g. ch 3 coo h + ch

Esters - . when alcohols are heated with carboxylic acids in the presence of concentrated sulfuric acid, they produce

Esters - . we are learning to:- name and describe the production of esters. how to make an ester. heat a carboxylic acid

Esters - . identify the family of organic compound under carbonyl group and give the iupac &amp; common name d’

esters market - Esters market will reach an estimated valuation of usd 110.68 billion by 2027, while registering this