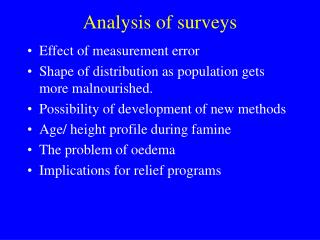 Types of Surveys - . cross-sectional surveys a specific population at a given point in time will have one or more of the

Surveys - . what is a survey?. get lots of structured information from lots of people. simplify and standardize data

Surveys - Use of complementary and alternative therapies by norwegian cancer patients. attitudes taken by norwegian

Surveys - . week 5 nj kang. what is a survey?. it is a research strategy than a method or technique  being ubiquity

Surveys - . fpp chapter 19. plan of study . conducting good surveys is not trivial. we will cover these three main