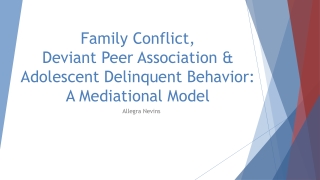 Family Conflict, Deviant Peer Association & Adolescent Delinquent Behavior: A Mediational Model. Allegra Nevins. Juvenile Delinquency. “The violation of a law of the United States committed by a person prior to their eighteenth birthday which would have been a crime if committed by an adult.”