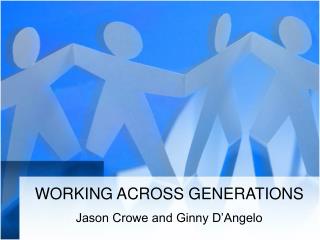 WORKING ACROSS GENERATIONS. Jason Crowe and Ginny D’Angelo. OBJECTIVES. To understand four generations in the workplace—their characteristics and needs To be aware of demographics in your workplace vs. the marketplace To gain insights into leading across generations. GENERATION TYPES.

Working Across Generations Jeff Van Pelt, Ed.D - . seminar goals . understand how each generation is unique, and their

Managing Across Generations - . what is a

Mixing it up across generations - . kathy weinsaft wyoming association of rural water systems. so what are we talking

Working Across Difference: - . making the movement for “health for all” a movement that welcomes all.

Working Together Across Disciplines - . challenges for the natural and social sciences david chandler and wyn grant.