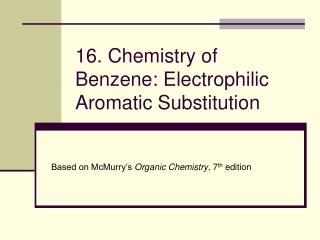 16. Chemistry of Benzene: Electrophilic Aromatic Substitution. Based on McMurry’s Organic Chemistry , 7 th edition. Benzene is aromatic: a cyclic conjugated compound with 6  electrons Reactions of benzene lead to the retention of the aromatic core.

Chapter 21, Benzene and and the Concept of Aromaticity - . benzene - kekulé . in 1872, august kekulé proposed the

α -Substitution and Carbonyl Condensation Reactions - . alpha-substitution reactions occur at the carbon next to the

POLYCYCLIC AROMATIC HYDROCARBONS - What are they? pahs are a group of chemicals that are formed during the incomplete