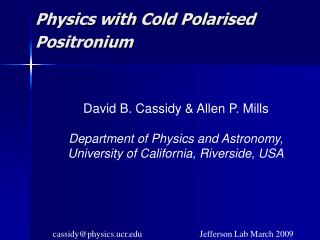 Measurements with Positronium - . p. crivelli one year fellowship from the snf for prospective researchers at the host

FAQs On Polarised Sunglasses - Check out the commonly asked questions about polarised sunglasses.

Progress with Cold Antihydrogen - . work presented mostly that of the athena collaboration. athena – circa 2004.