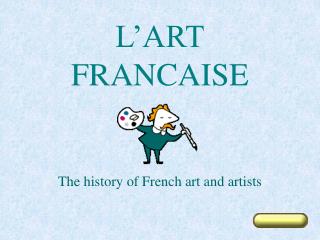 L’ART FRANCAISE The history of French art and artists FRANCE… What comes to mind first? Bread, monuments, fashion….ART. For centuries France has been a center for the arts. Exactly how and when? That is what you are about to discover. L’ART PRE-HISTORIQUE