Reactions of Benzene and its Derivatives - PowerPoint PPT Presentation 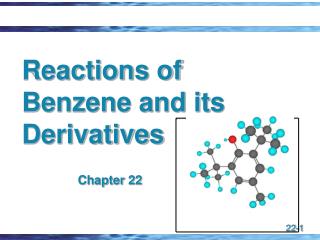 Reactions of Benzene and its Derivatives

Reactions of Benzene and its Derivatives

Benzene is aromatic: a cyclic conjugated compound with 6  electrons - Reactions of benzene lead to the retention of

Aromatic compounds - . 2011-1432. 1. learning objectives. by the end of chapter four the students will:. understand the

Questions of the Day: - . the reactions in our exp. 3 (nbs-bromination) are radical reactions! a) what is the structure

5. Benzene and Aromaticity - . aromatic compounds. the term “aromatic” is used to refer to the class of compounds

Applications of UV-Vis Spectroscopy - . the molar absorptivity as seen earlier: validation of beer’s law is dependent