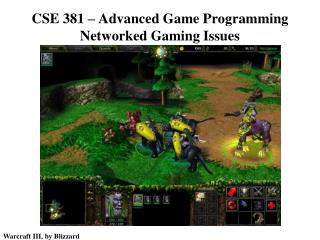 The goal of the networked game programmer: ensure there is little enough information going through the pipe so as not to take up all available bandwidth ... CSE 381 – Advanced Game Programming Collision Detection - . remember this?. we spent a lot of time on this in the

CSE 381 – Advanced Game Programming Terrain Management - . think of it as a textured blanket. terrain. obviously a

COS 381 - . day 20. agenda. assignment #5 due capstone progress reports overdue were due april 7 capstone projects are

CS 381 - . game engines are composed from entities – a collection of game entities gfx – a graphics engine to display

COS 381 - . day 12. agenda. assignment 2 not corrected viewed the results and it looks like many of you failed assignment