A System Is Not a Tree - PowerPoint PPT Presentation 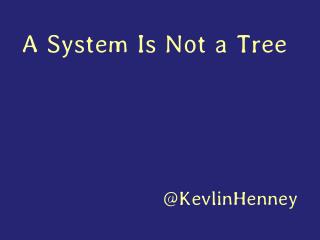 A System Is Not a Tree Trees. Both beautiful and useful. But we’re not talking about the green, oxygen-providing ones. As abstract structures we see trees all over the place – file systems, class hierarchies, ordered data structures, etc. They are neat and tidy, nested and hierarchical – a simple way of organising things; a simple way of breaking large things down into small things.

The problem is, though, that there are many things – from modest fragments of code up to enterprise-wide IT systems – that do not comfortably fit into this way of looking at the world and organising it. Software architecture, design patterns, class decomposition, performance, unit tests... all of these cut across the strict hierarchy of trees. This keynote will look at what this means for how we think and design systems, whether large or small.

A System Is Not a Tree

Objective Tree 2 - The sese system needs to provide power to meet the individual stakeholder needs. each stakeholder has

SAVE THE TREES - . by john mackenzie. why we need trees. trees are important 1. trees give us fresh air 2. trees are home

NEEM TREE - . by sneha krishna, dhwani dhadheech. introduction. among the many natural plants and herbs that people in

Life Cycle of an Apple Tree - . by: indira san andres. seedling. it will take about 1 year to make a seedling into a

Fault Tree Analysis - . by patrick ackerson. outline. why do we need fault tree analysis? what is it? why do we use it?

RED-BLACK TREE SEARCH THE FOLLOWING METHOD IS IN tree.h OF THE HEWLETT-PACKARD IMPLEMENTATION: - . implementation of the